Kevin began his private practice career at the nation’s leading management-side labor and employment firm. Back then, Kevin represented the nation’s largest employers in discrimination, retaliation, harassment, wage and hour, labor, and non-competition litigation, in both class actions and individual cases. Kevin took several of these cases to trial before federal and state courts, secured the dismissal of others through motion practice, successfully resolved many others through formal and informal mediation, and represented employers in federal and state agency investigations.

Kevin also advised large, midsize and small businesses on a variety of employment-related matters, including the enforceability of non-competition agreements, and drafted effective policies aimed at avoiding litigation and creating a healthy and supportive culture within these businesses.

In 2016, Kevin left his career as a management-side attorney to represent individuals because people deserve the same quality of representation enjoyed by Fortune 500 companies. 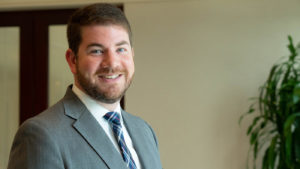 Kevin is the Immediate Past Chair of the North Carolina Advocates for Justice’s Employment Law Section and has been named to the 2018, 2019 and 2020 Super Lawyers’ Rising Stars lists. Kevin has an Avvo Rating of 10.0—the highest rating available from AVVO. Kevin earned a Client’s Choice Award for 2018 from AVVO.* Kevin has also been selected by his peers as a member of North Carolina’s 2018 Legal Elite in Business North Carolina Magazine.

Kevin is a frequent lecturer on employment law topics, including at the annual conference of labor and employment attorneys from both North and South Carolina where Kevin spoke on “Ethical Issues in Employment Practice” and the annual conference of plaintiffs lawyers in North Carolina where he lectured on employment law. Kevin has also presented at the Mecklenburg County Bar’s seminar for attorneys entitled, “What is the Public’s Policy? Wrongful Discharge after HB2,” as both the organizer and a speaker.

Kevin is a member of St. Peter Catholic Church and serves as a volunteer with St. Matthew Catholic Church’s Mel’s Diner ministry, which has been feeding the hungry since 2001. Kevin also volunteers his time with Charlotte-Mecklenburg Schools’ Lunch with a Lawyer program.

*The Avvo Rating is Avvo’s evaluation of a lawyer and is calculated using information the lawyer has included on their profile in addition to the information Avvocollects from public sources like state bar associations and other published sources on the internet. Avvo uses the following to determine a lawyer’s Avvo Rating: Experience & background, years licensed, work experience, education, legal community recognition, peer endorsements, associations, awards, legal thought leadership, publications, and speaking engagements. Avvo’s denomination of a “Top Attorney” cannot be substantiated and is not intended as a comparison to other attorneys.

GET IN TOUCH
PRACTICE AREAS